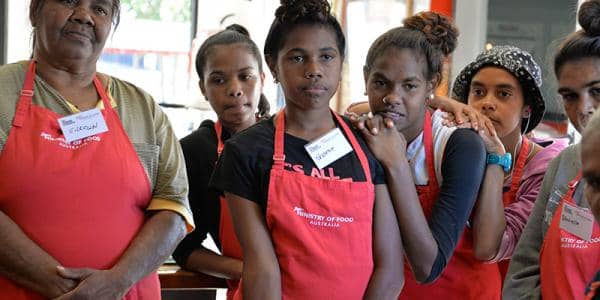 MEDIA RELEASE:
Jamie’s Ministry of Food Queensland Mobile Kitchen is preparing for its next stop, this time visiting Cherbourg where it will for the first time deliver the program to an Aboriginal community. Aimed at teaching locals Jamie’s basic cooking skills, the Mobile Kitchen will be located at Cherbourg Hospital, front car park, Fisher Street, Cherbourg from July 2015.

Following numerous requests from Aboriginal and Torres Strait Islander communities across the country, The Good Foundation, which delivers Jamie’s Ministry of Food Australia, has developed the program with a view to addressing rising rates of diet related disease in Australia.

“The team at Jamie’s Ministry of Food has worked directly with respected Cherbourg locals and leaders alike to ensure the program fits the needs and wants of the community. We’ve ensured the program has flexibility in order to connect with locals and has been specifically adapted for the Cherbourg community to work towards delivering the same positive results and outcomes as seen with the original program. “said Elise Bennetts, Acting CEO, Jamie’s Ministry of Food and The Good Foundation.

As Australia’s third largest Aboriginal community, The Australian Bureau of Statistics lists Cherbourg as the second most disadvantaged community in the state of Queensland with a SEIFA index of 555.7. The community has indicated a strong desire to receive the Mobile Kitchen and is excited at the prospect of participating in the program.

The annual financial cost of obesity in Australia has been estimated at AUD$8.3 billion with an additional AUD$49.9 billion in the form of lost wellbeing, bringing the combined cost of obesity to AUD$58.2 billion.”

“The rise in diet related diseases in Australia have increased to excessive proportions with a huge 63% of Australian adults and 26% of Australian children aged under fifteen overweight or obese. So I’m really excited about our Mobile kitchen reaching more remote communities such as Cherbourg where we can teach even more Aussies how to cook from scratch and have some fun while having a positive effect on their long term health.” said Jamie Oliver.

A recent evaluation, conducted by Deakin University and University of Melbourne has shown that participants who complete the back to basics home cooking skills program, increased their vegetable consumption and changed their cooking confidence and cooking and eating behaviours. Participants were more confident in cooking meals from scratch, purchased and consumed more vegetables and spent less on take away foods. This was sustained for 6 months after completing the course.

The Mobile Kitchen program offers a five-week cooking course, comprising one 90-minute cooking class per week with up 12 participants in each class. Participants will learn Jamie’s hints, tips and shortcuts and at the end of each class will take home a freshly cooked meal for friends or family. Classes begin on 13th July 2015 running classes from Monday through to Thursday each week, concluding in August. Jamie’s Ministry of Food Mobile Kitchen will deliver hands-on basic cooking classes led by a team of dedicated food trainers.

Delivered by The Good Foundation, local residents will have the opportunity to access and participate in an innovative, community-based cooking program built on Jamie’s beliefs about cooking and the associated impact on healthy living.

Bookings for cycle 1 are open now and can be made through www.jamiesministryoffood.com

The Good Foundation is a not-for-profit organisation which has partnered with Jamie Oliver and The Good Guys to deliver Jamie’s Ministry of Food throughout Australia.