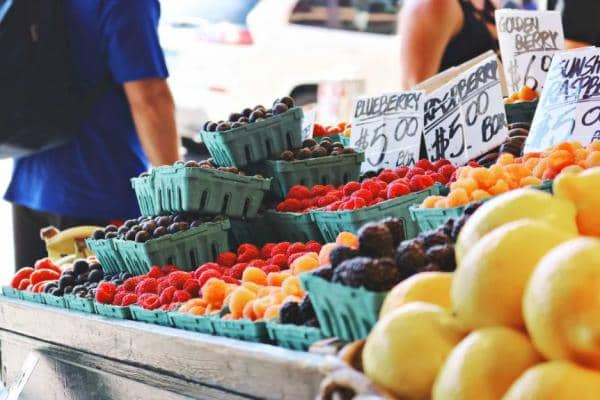 For many Australians, eating fruit and vegetables is a tough sell.

A new national body has been established to change our consumption habits and help the farmers who grow fresh produce.

The Fruit and Vegetable Consortium is made up of 11 members including Nutrition Australia, AUSVEG, the Cancer Council of Victoria and various government bodies.

Its chair, Lucinda Hancock, said there was a need for a consolidated national approach.

“There’s been a number of peak bodies in their own rights, however what hasn’t happened is a collaboration between health research and also the vegetable industry and market authority,” she said.

“Really, that’s been the missing piece which I think is absolutely vital.

“If we don’t pull together, I think the success of a campaign is minimal, hence why we really need the group.”

A closed green booklet placed on top of an open booklet stating the Consortium’s position statement.

The new body aims to bring stakeholders together to improve fruit and veg demand.(Supplied)
Ms Hancock said she believed Australians were confused over what to do with vegetables.

“I think that for a lot of people, cooking skills are lacking and in the era of Uber Eats, a lot more people are eating takeaway, so they don’t know how to prepare, store or what to do with leftovers,” she said.

James Whiteside, chief executive of AUSVEG, agreed there was an issue with getting Australians to eat fruit and veg.

“Our fruit consumption is a lot better than our vegetable consumption,” he said.

“We don’t appreciate the nutritional value enough, even though we’re told that they’re good for us.

“We’re not good at creatively finding delicious ways to eat the product.

“In some cases, there’s a perception they’re labour-intensive and require some effort to cook, which is not necessarily the case.”

The consortium hopes to increase our fruit and vegetable consumption.(Flickr: WordRidden)

The consortium hopes to address other factors affecting consumer habits, including cost, availability and supply.

“Our plan would be to ensure that vegetables are available, and if we’re in a really good position with the campaign with increased demand, hopefully we can also advocate to government to subsidise the cost of more expensive vegetables,” Ms Hancock said.

“What’s really important is everybody has a right to consume vegetables equally and should be able to afford them.”

The campaign, while still in the works, hopes to have similar success to the Life Be In It and Slip, Slop, Slap commercials, and the more recent Eat Australian Lamb ads by the Meat and Livestock Australia.

“These campaigns have perennially changed how we we behave — that’s the sort of investment that you need to make,” Mr Whiteside said.

“It’s probably going to take a period of five to seven years.”

In recent months, producers have reported an increase in demand for home-delivered fruit and vegetable boxes, particularly organic produce.

Kristen Ottaway wears a black t-shirt and crystal necklace, smiling at the camera.

Kristen Ottaway has seen a sudden uptick in demand for her organic produce.(Landline: Halina Baczkowski)
Although Australia doesn’t have a clear definition to certify organic produce, organic farming is known to use no man-made fertilisers, pesticides, growth regulators or livestock feed additives.

Kristen Ottaway, who runs an organic online supermarket, said her business gathered produce from 22 farmers and delivered it throughout Brisbane.

“We were sitting at around about 300 to 350 boxes a week before COVID hit, and then we skyrocketed to about 800 boxes a week overnight,” Ms Ottaway said.

While the surge was encouraging, farmers have seen demand steady as the pandemic goes on.

Anthony Bauer, one of the country’s largest suppliers of organic vegetables, said he recorded a large increase in demand in March.

“When coronavirus hit, we had up to 400 per cent growth in the first few weeks, then it obviously settled down,” he said.

Rows of carrots planted in a field with mountains in the background.

Anthony Bauer is pleased to see growth in demand for his vegetables, like these carrots.(Landline: Halina Baczkowski)
Mr Bauer said he welcomed the introduction of the consortium.

“We definitely need it. We need consumers to be putting more focus, more value, on fruit and veg,” he said.

Watch this story on ABC TV’s Landline at 12:30pm or on iview.